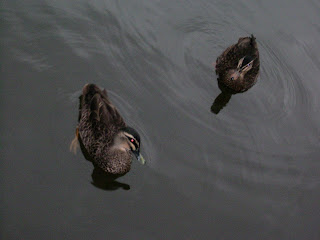 There is a serenity about the film that is also present in Mehta’s Water. Mehta has commented that she was influenced by Ozu’s restraint, and often cut out dialogue at the last minute while shooting Water. Also, just as the relatively still camera and the aesthetically-pleasing visuals of Ozu’s film stand in stark contrast to the collapse of the joint family and the mental turmoil of the aged parents and the war widow in post-war Japan, the starkness of the widows’ lives in Mehta’s film stands out against the sheer magnificence of the Ganges and its ghats. When I watched the elderly couple in Tokyo Story, banished to the modern resort of Atami Springs by their hassled city children, I was reminded of a scene in Water. The Japanese pair sit in close proximity and comment on the calmness of the sea (this image also appears on the DVD cover), while Kalyani and Narayan stealthily meet by the river bank. There is a cross-cultural and cross-generational similarity here that is particularly poignant. It is difficult to predict to what extent Mehta was influenced by this scene, but the evocation of enduring love through the image of flowing water is not lost on us. Another similarity is the image of the train at the end in both films. While Chuia, the seven-year old widow in Mehta’s film is bound for a more certain future as she has been handed over by her self-appointed guardian, Shakuntala to Narayan, a Gandhian, the destiny of Noriko, the widow in Ozu’s film who is closer to her in-laws than their blood relatives appears uncertain. As Noriko gazes at the antique timepiece given to her by her father-in-law as a souvenir of her recently deceased mother-in-law’s memory, I hear Gandhi chant on the railway platform in Benares – “Truth is God”. Perhaps both widows are not forgotten.
Posted by Sukhmani Khorana at 21:18