The Busker who thought I was Mad 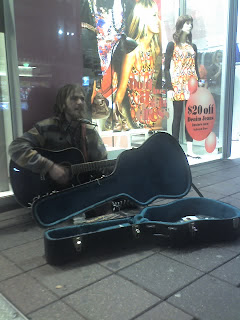 I have developed this photo fetish of late. Flipping open my phone camera. Disregarding anonymous glares. Discovering the joy that is everyday life in momentary flashes. The question now arises - will this newfound love survive the rigours of a routine alternately boggled down by work and longing? I hope it endures for as long as it gives me pleasure, and brings a smile on the face of the occassional busker on an otherwise cold and sombre evening.
Posted by Sukhmani Khorana at 15:07 2 comments: 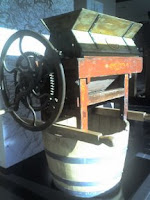 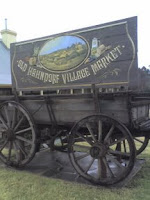 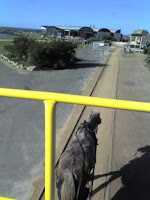 Posted by Sukhmani Khorana at 23:14 No comments: 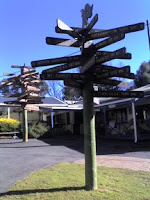 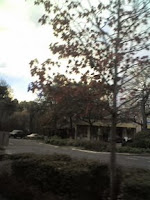 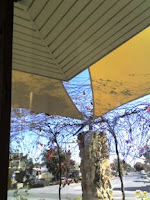 Posted by Sukhmani Khorana at 23:07 No comments: 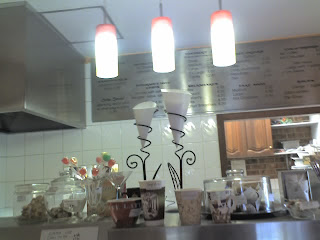 When there is nothing to believe in, but life and light, shapes and shadows, tastes and treats.
Can a steely urban cafe be beautiful?
A risk assessment officer in love?
A bowl of wedges ornamental?

Is this kitsch
or art...
Is this faith
or blasphemy...
Sir Rushdie?
Posted by Sukhmani Khorana at 23:20 2 comments: 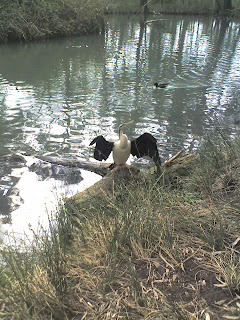 It began with a headscarf
that flew away
despite being knotted.
And then there was a hat
that didn't quite fit
over the bun.
So the hair was shorn
like autumn leaves
that are auburn
and tragically beautiful.
The split ends are now gone
and the broken heart
has lived through winter.
Posted by Sukhmani Khorana at 22:45 No comments: 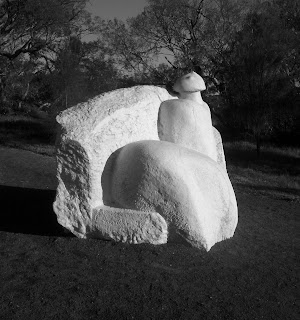 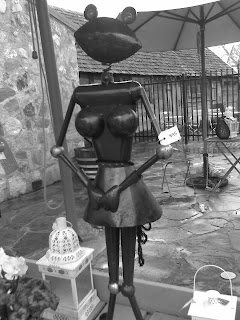 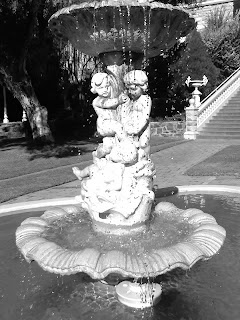 Posted by Sukhmani Khorana at 15:49 No comments: 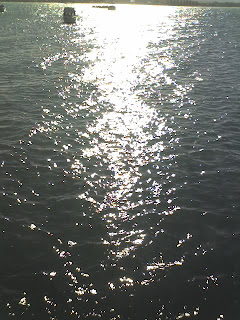 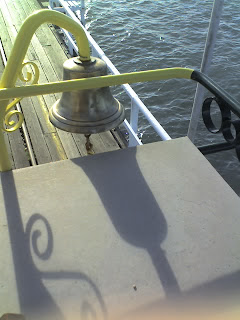 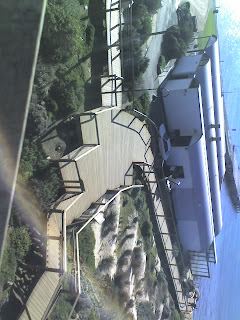 Posted by Sukhmani Khorana at 00:09 No comments: 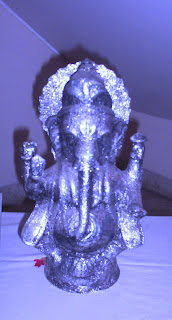 The Meditation Lady solemnly declares, “His Holiness the Dalai Lama was once questioned about the concept of self-hatred. Unable to understand the word, he requested a translation in Tibetan. And sure enough, the distinctly ‘western’ notion of hating and judging the self didn’t exist in his language, or, for that matter, in his culture.”

The Experimental Musician sips a freshly brewed cup of camomile tea at Om Organic Café. The beads-clad Blonde-turned-Brunette sashays through the crowd in an ankle-length cotton skirt. The newly-bald Recent Convert to Buddhism practices patience in a supermarket queue. The Afro-haired Prince Charming chats up with a Jehovah’s Witness. The backache-prone Yoga Practitioner takes the lift to his first-floor office. The Curry Lover asks for more meat than sauce in his main course meal. The Vegan thinks…we all need to get back to our roots.

After two years of living in a Western Society, these are the tokens I see of the East. And what do I see when I go back to the East? Much more than tokens of the West. Hybridity abounds, but unfortunately, so does misrepresentation.

Premier Rann gives a glorified speech to the New Citizens of the state. He himself has visited India, and is bent on pointing out the similarities as opposed to the differences between the two nations. We are both democracies, and we both value our multi-culturalism. Sorry Uncle Rann, your good intentions aside, we don’t call it multi-culturalism in India. We prefer the more pedantic Secularism. So Prime Ministers don’t mourn over Popes and Popes don’t Cry about Wars.

Agreed we have communal riots now and then, inter-religion marriages are still frowned upon, but things are Changing. The average urban youth is a Hinglish-speaking Kylie fan with a distant cousin studying in America. He/she is not living in a mono-culture, or a hybrid-culture, but a culture where culture is not self-consciously multi-cultural. Where culture does not try to Include or Assimilate. Where culture is not a Melting-Pot or a Soup or a Mosaic. Culture is just human nature not yet subjected to the inward gaze of postmodernism.

When I came to Australia, I was asked what my mother tongue was. Probably Hindi, because that is the national language of my home country. Or Punjabi, the tongue of the religion I was born into. Maybe Urdu, the official language of my state. Perhaps it is none of these, because I do not Think in any of these languages. I learned more Punjabi while working at an Indian restaurant in Adelaide than I would have ever learned in my particular social circle in India. And my English, formerly the Queen’s version passed down to generations of post-colonial subjects, is now closer to the colloquial jargon of a native speaker. But worst of all, I am Conscious of my Accent. I am Aware of being Different. I am an Ethnic person in a multi-cultural society.

Who then, is not Ethnic? Is multi-culturalism only relevant for the countless Ethnicities? If it only implies food and travel for the majority; if it is another consumer durable for a shopping-friendly society; if it only means world music and world cinema for the arty-farty…then a few Oxfams are adequate.

Posted by Sukhmani Khorana at 13:15 No comments: 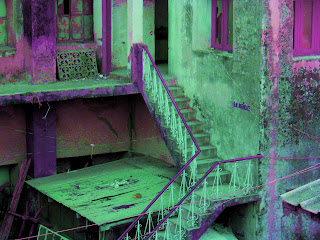 How can she say where it began or when for she jumped over the crater on the first stair?
And by the time she reached the end of the steep climb, she thought the craters wouldn't matter.
Nor would the effort.
She hoped it would all be worthy of her passion, deserving of her resolve.
But she couldn't bend anymore.
She had to walk away.
To discover she was not the end of the beginning she always assumed herself to be.
She envisaged herself as a grand stairway in an ancient mansion.
Though she later found out she was made from the steel and cement of outdoors.
And still had pink outlines and shadows.
Posted by Sukhmani Khorana at 12:29 No comments:

From Wikipedia:
By the early 1930s, the talkies were a global phenomenon. In the United States, 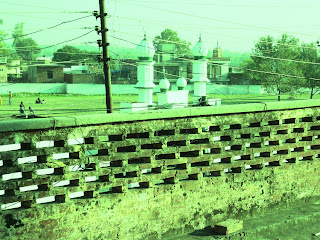 they helped secure Hollywood's position as one of the world's most powerful cultural/commercial systems. In Europe (and, to a lesser degree, elsewhere) the new development was treated with suspicion by many filmmakers and critics, who worried that a focus on dialogue would subvert the unique aesthetic virtues of soundless cinema. In Japan, where the popular film tradition integrated silent movie and live vocal performance, talking pictures were slow to take root. In India, sound was the transformative element that led to the rapid expansion of the nation's film industry—the most productive such industry in the world since the early 1960s.
Would contemporary audiences rate sound over image? I guess it depends on where they come from, and where they might someday find they belong...
The Namesake
Dir. Mira Nair
Based on a novel of the same name by Jhumpa Lahiri, I found I could relate a tad too much to the tale of a Bengali family "displaced" in/to America. Having said that, I was surprised to hear from a non-displaced fellow student that he enjoyed the film and especially like the fact that there were so many layers to a simple story. My favourite scene remains the one where the confused son of the family, Gogol shaves off his head after the sudden death of his father...tears would have been cliche. Long live storytelling!
The Science of Sleep
Dir. Michel Gondry
I wish it were called "The Art of Sleep". Having a glass of wine before going into the cinema was the best thing I could have done, for I'm sure it accentuated the blurring of reality and dreams that the film indulged in so ruthlessly, yet so artistically. Now I'm convinced dreams are made of cellophane, and cars of cardboard. If all this sounds/looks like a puzzle, I'll give you a clue - it is by the same "freak" who co-directed "Eternal Sunshine of the Spotless Mind".
An Autumn Afternoon
Dir. Yasujiro Ozu
Set in post-war Japan, this film is as Japanese as they come, yet is surprisingly accessible. For those not familiar with Ozu, his work has won him several Cannes-type awards. His filmmaking style is often minimalistic, using low camera angles and interior spaces - this strikes me as the best technique to capture daily life in Japan at a time of transition, when people are wearing suits and dresses, yet sitting on the floor. But with nagging wives and guys' night outs, I'm sure the film transcends space and time.
Before Sunrise
Before Sunset
Dir. Richard Linklater
I feel proud to include these "romantic comedies" in my recently watched films list. Proud because the romance, especially in the sequel, seemed "real" (at least it was shot in real time). I loved it that it ended without a wedding, or a kiss, or a hug. Why don't the citizens and denizens of Hollywood make more films like these?
Posted by Sukhmani Khorana at 01:14 2 comments: