Six years ago, I remember driving out of a posh Hyde Park cafe with a university pal and casually mentioning that it would be boring to tie the knot with someone of the same ethnicity/background. My friend, a few years older and a bit more factually-oriented (perhaps as a direct result of being male) correctly pointed out that most people marry within the same post code. How unimaginative, I thought! Three years later, I had a reference from popular culture to add to my strengthening belief in the appeal of being and being with someone 'wild'. It was the scene from Sex and the City (yes, again) where Big is getting married to a 26-year old and Carrie walks up to him and asks why it wasnt' her. He is non-commital, and finally says that it just got too hard, after which she brushes off the hair falling on his forehead, and repeats the much-acclaimed line - "Your girl is lovely, Hubble". The episode ends with a usual Carrie-esque epiphany, but this time she is not pining away for a man, simply acknowledging the possibility that maybe she just wants to be free and run wild until she finds someone who can be wild with her. Kudos to kinky-haired girls!
Now, a certain degree of practical experience later, I am wondering if I (and many of my fellow women) are so open-minded and kinky after all. Can we, for instance, date someone so different from the way we were brought up that their good qualities overshadow our own prejudices? A conversation with a stranger who turned out to be a blue-collar worker made me realise that I am more conditioned by my class and upbringing that I am willing to admit. The man in question was quick to point out that I must be upper-caste Indian because of my proper English. (An aside - questions/remarks to do with the Indian caste system, arranged marriage, and Bollywood do not constitute good pick-up lines or initmate conversation topics). While the formative years spent poring over Shakespeare, Austen, Dickens and others have contributed to this 'properness' (or an illusion of it anyway), I can't help but wonder a) if this is a reaction to dissociate oneself from any assumptions about a rustic brand of 'Indianness', and b) whether being well-read and worldly can free one completely from the often prudish attitudes of the birth culture.
Case in point is a character named 'Prudie' in the film, The Jane Austen Book Club. Prudie is a French teacher who is ashamed of the fact that she has never been to France and who, according to her bohemian mother, dresses like a flight attendant. Not only has she gone the other way because of her hippy commune upbringing, but she is also constantly finding fault with her neanderthal husband. An episode of lust towards a student makes her wonder if her mother is dormant within her, although she eventually chooses to stay loyal. Perhaps the moral then (if there is any such unequivocal 'thing' as a moral) is that all one can do is not beat oneself up about what one is or isn't. True open-mindedness lies is recongnising the limitations of the self as much as being empathetic to the flaws of the other. Prejudices welcome...
Posted by Sukhmani Khorana at 01:04 No comments: 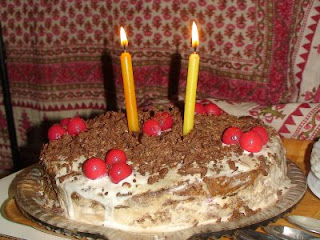 I have flirted with ‘Atheism’, ‘Buddhism’ and everything in between during the last eight years of living away from my parents’ home, but feel the time is now ripe to ‘settle down’. These flirtations have often been the consequence of beliefs and opinions held by current and former nears and dears, alongside the desire to be unethnically cool. However, their shallow roots in my heart now lay exposed, and the soil of my soul is seeking a new seed. This seed better be mine if it is to yield a lifetime of resilience and contentment. What is this seed? What is its texture and colour? What is MY opinion on/of God?

I look through school photos as well as pictures of my early years in Australia and see a recognizable but not entirely familiar face staring back. That girl is an unmistakable nerd in her loosely fitted clothes, her round glasses, her plaited hair and her intellectually timid demeanor. This girl, even though ‘academic’, as pointed out recently by a good friend, is no longer the Goody two-shoes idealistic achiever of her younger years. She/I now would rather read a classy women’s mag or bead a bohemian necklace on a lazy Sunday afternoon than attempt to finish my tutorial readings before time or brush up on the latest in US politics. I would rather babysit my best friend’s ten-year old brother (even if it involves successive defeats on Playstation car games) than lock myself in a room and write an impassioned piece on the trauma faced by first and second-generation immigrants. Where is the career woman, the Miranda (of Sex and the City fame) that I always envisaged myself to be? Why do I feel like a mixture of Carrie and Charlotte? What is MY destiny as a young woman who wants a balance between enjoyment of material comforts, devotion to worldly causes and the pursuit of creativel hobbies?

I am sporting a fringe after years of having nothing but long, dark, straight, and increasingly boring hair. After experimenting with hair scarves, layers, partings, side ponytails, I was simply looking for something more expressive of me. This ‘radical’ new hairstyle received a warm reception from friends and colleagues in Adelaide, but I was wary of the reactions it would provoke back home. To my pleasant surprise, my parents did not utter a word of protest and my can’t-keep-anything-to-herself sister said I looked like a doll. Me? A doll? I took this well, but when my mum later commented on her eldest daughter being a firang (foreigner), I was taken aback. True, I will celebrate my sixth anniversary of being in Australia in early 2009, but I love Indian textiles, silver jewellery, Mughalai cuisine, anarchic politics, Hinglish writers, Sufi musicians and other cultural artifacts even more than most ‘Indian Indians’. Perhaps this nostalgia, this romanticized notion of India’s highest potential is what makes me a foreigner in the land of my birth. Perhaps my now-persistent whining about the smallness of Adelaide and the back-of-beyondness of Australia implies that I am actually mirroring the regular Aussie whinger. Perhaps I just need to stop thinking about where I belong, and ask a more pertinent question. What is MY culture as a hyphenated, globe-trotting, transnational citizen?
It all began with a literal pause...a night when everything around me seemed to be in slow motion. After initially dismissing it as a simple case of fatigue, I spoke about 'it' to a few good friends, all of whom recognised it was a larger malaise, perhaps along the lines of an 'existential crisis'. Sounds like a post-modern Agatha Christie mystery? Well, it gets better. For there were no love notes or last letters, but there was a new life. Encouraged by friends and colleagues, I decided to travel to India for a couple of months and take a real 'break'. Cliched it may be, but I began to look at the trip as a 'spiritual journey', although it later acquired emotional and intellectual dimensions, thereby convincing me that spirituality is integral to a fulfilling personal and creative life. Amongst the holiday reads I took along was a best-selling book by Elizabeth Gilbert called 'Eat, Pray, Love'. Another cliche perhaps, but it worked. And the first song that played on my iPod as I sat on the flight back to India was Joni Mitchell's 'I get the urge for going, but I never seem to go'.
I went, paused, came back. I still try to pause everyday. Not to reflect on my day, or analyse my situation, or judge those around me, but just to sense the present moment. Call it meditation, or positive thinking, or a love of life, all I know is that it is immensely empowering and calming at the same time. It has given me my grace back, and endowed me with gumption.
And so I have decided to write a non-linear book called 'iPause' to understand the pause and share the journey. Sounds like an Apple gadget with a bohemian spin? Well, I'm not getting paid by Steve Jobs or the Dalai Lama. They can donate a spare Mac and a speck of Elightenment if they like...
Posted by Sukhmani Khorana at 01:13 No comments: