Racism and Narrative, Diversity and Food 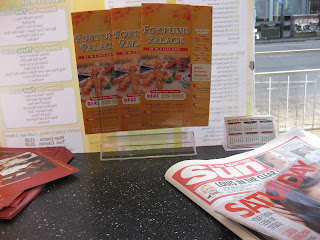 What happened in the vibrant Australian media sphere while I was conferencing at the Sorbonne, and skipping television in favour of ethnographic experiences in Parramatta?

A list that clearly reflects my democratic taste:
1. Simon Sheikh, National Director of GetUp!, collapsed on Q&A
2. Sophie Mirabella, Federal Liberal MP, was slammed for not assisting Sheikh
3. 'Dumb, Drunk and Racist' continued to get love and hate mail (feel free to correct me on this one)
4. 'The Shire' trended far more than 'Abstudy' on Twitter
5. Amina, the headscarf-clad MasterChef contestant, was eliminated from the Kitchen

If you notice implicit or explicit links between any of the above listed items, you would have guessed that underlying my democratic taste is a culturally diverse palate. This palate is in turn shaped by reading vast tomes of race, postcolonial and globalisation literature, and through sharing difficult and enriching 'identity' anecdotes with friends and colleagues. At the same time, most of the academic sessions on racism and multiculturalism that I have attended over the last couple of weeks have convinced me of the need to approach these issues via narrative rather than theory. Slamming 'white privilege' in the face of someone who comes from a working-class suburb or has just been retrenched will not go down well without context, history and experiential telling.

Case in point is the last item on the list, which happened to coincide with the large number of papers I heard on transnational versions of MasterChef, national cuisine and identity, and food and inter-cultural relations. Reality shows such as MasterChef, or films featuring central characters making beautiful food, or the experience of visiting a kebab shop in the middle of a riot are useful tools for broaching the subject of race in classrooms and public forums. Moreover, they function as clues and cues for large sections of the national and international media on representing diverse populations. Of course there will be plenty of hate mail, offensive online comments, and perhaps even a 'that was brave' remark or two from fellow storytellers. Empirical evidence, another kind of narrative, may come in handy on such occasions!

Take, for instance, the results of the 2011 Australian Census. I will not reiterate here what are now widely known statistics about the rise in Mandarin, Korean, Arabic and Hindi-speaking members of the Australian community. What did come as a surprise, however, is the subsequent assumption in the editorial of 'The Weekend Australian' which stated that these numbers are a testament to our tolerance, and prove that 'Dumb, Drunk and Racist' is a tabloid documentary. A News Limited publication referring to an ABC-comminissioned series as 'tabloid' is more than just a case of the pot calling the kettle black. What is more significant, however, is that it signals a popular perception regarding cultural and religious diversity.

The integration idea of the 1970s has clearly given way to ghettoisation (on all sides), and the rhetoric of tolerance. We don't seem to have moved beyond displaying our cosmopolitanism by eating butter chicken, or occasionally buying the sauce at Coles. My own experience of this dates back to my undergraduate days in the Adelaide University Union - interaction between local and international students was recognised as a glaring issue, but one that no side was willing to take a lead on. Almost a decade on, I heard the same problem discussed at the recent Asian Studies Association of Australia conference, where Dr Ken Henry shared thoughts on his 'Australia in the Asian Century' white paper. Let's hope this report is a narrative of policy as well as hope, and that it gives us both a framework for future action, and also a dose of much-needed initiative.

Posted by Sukhmani Khorana at 17:46 No comments: