Letting Go as a Migrant: Thinking about Dina Nayeri's 'Refuge'

I decided to pick up this book after reading writer Dina Nayeri's much-acclaimed long-form essay for The Guardian titled, 'The ungrateful refugee: we have no debt to repay'. The reason for its commendation has as much to do with Nayeri's personal life trajectory (and its twists and turns), as it does with our recent recognition of benevolent forms of solidarity as fraught and harmful.

It wasn't, however, my research interest in refugee advocacy that kept me going with the essay, and with her eminently readable work of fiction. At the risk of sounding like yet another reader aspiring to see her particular trials mirrored in a character, I have to say that certain stories of seeking asylum and settling in also resonate with student-migrants like myself. 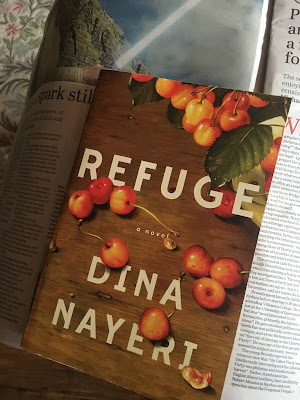 In Nayeri's case, I can empathise with the pressure to excel academically, deny pleasure, make endless lists, be in fear of losing one's new passport, feel guilt about one's embarrassment over aspects of the culture of origin, and just generally experience a state of constant striving (even while thriving). Or perhaps I can more than empathise as I have fallen prey to all of the above, and it is only this summer that my mind and body are re-discovering what it means to really relax. To many who are not first- or second-generation migrants, this looks a little frantic and unnecessary. In the Australian context, it could even be seen as tall-poppyish and not easy-going enough. For those in the midst of it, however, no other state could be more natural.

So what happened to Nayeri herself, her main character Niloo, and this reader to suddenly let go of our ceaseless climbing? In the case of the book's author, she gave up a lucrative career in finance, and a long-term marriage to a considerate Frenchman to dedicate herself to the writing life. Niloo had a similar run, and separated from her husband as she claimed that he was in love with a stranger, and not the essence of the Iranian child she once was. There are certainly less dramatic changes afoot in my life, but I have unequivocally found a sense of belonging in the here and now. Isn't this what most displaced people are really seeking?

As the silly season approaches, I want to dedicate this post to all my fellow migrants, refugees and overseas students who will be working long hours in retail jobs, hoping to escape the desolation of the city on Christmas Day, assuring themselves and loved ones that they will visit next year, and mostly just praying that their kids still believe in Santa. To you, I promise that your holiday is around the corner, and it will smell so sweet that you will no longer pine away for your grandfather's farm, or hanker after your neighbour's backyard barbecue.
Posted by Sukhmani Khorana at 15:45 No comments: