Who can Photograph Whom, and How: A Review of ‘Home: Photographs of ethnic communities’ by Louise Whelan 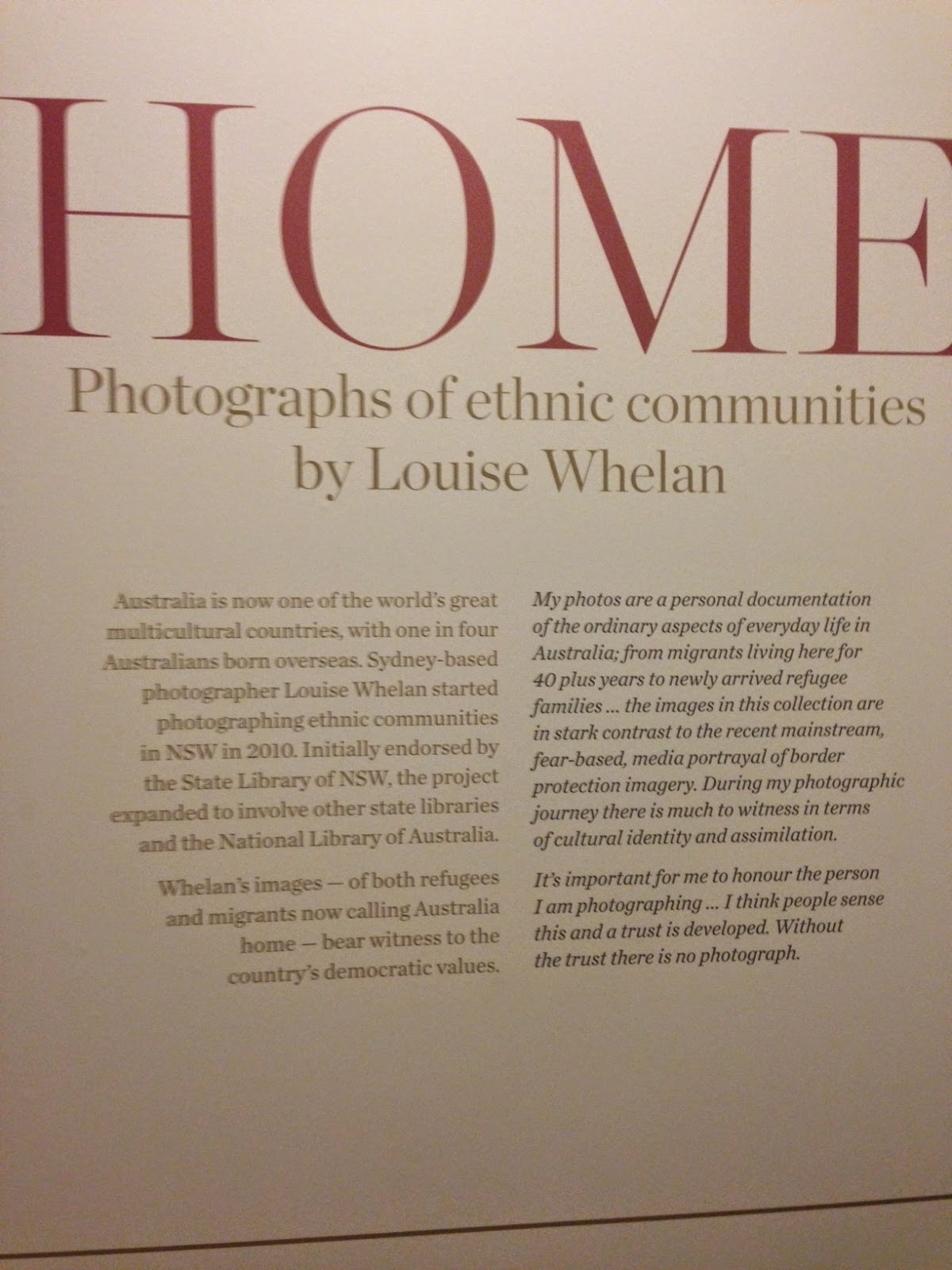 There was much criticism of the NSW State Library's panel titled 'Multiculturalism: What are we afraid of' in March this year. For instance, Professor Andrew Jakubowicz (Co-Director of the Cosmopolitan Civil Societies Research Centre at UTS) wrote a piece in The Conversation equating the all-white composition of the panel to the gatekeepers of multicultural Australia. However, he didn’t review the photographs at the centre of this debate, or call into question the photographer’s ‘good intentions’. In yet another article critiquing the panel and the State Library, Sydney-based writer Ruby Hamad pointed out an image from the exhibition’s Facebook page, and its underlying caption to argue that ‘those of us from “different cultures” are not specimens to be dissected and discussed by Smart White People’. So what was it about this picture, the exhibition as a whole, and the artist’s statement that warrants us to pay more attention as viewers/witnesses?

The image that irks Hamad is that of four ‘Congolese’ children, seated on a bench, and looking bored at a wedding in Dapto in 2010. The Facebook description adds, ‘this just one of the many fantastic photographs that will take you into homes and urban environments of both refugees and migrants now calling Australia home’. While the photographer, Louise Whelan was purposely commissioned by the State Library to carry out the above, the results come across as 19th century colonial anthropology rather than 21st century inter-cultural ordinariness. Her artist’s statement duly acknowledges the intention to counteract negative media portrayals of migrants and refugees, but also complicates the counter-narrative by noting that she has been bearing witness to ‘assimilation’.

In a book titled Witnessing Australian Stories, Kelly Jean Butler writes, ‘Witnessing, thus, involves a double move: the need to witness to the other, while at the same time, witnessing to the self in the act of witnessing. In this way, witnessing is simultaneously a process of self-fashioning, of articulating different forms of selfhood, and of forging new kinds of communities among witnesses’.

Is it this self-witnessing that is missing when Whelan bears witness to ‘ethnic’ communities and takes photographs of them in their everyday settings? Is her inability to see and recognise the power relationships in operation what makes me uncomfortable and disaffected as a witness to these representational encounters? Is the sheer political and cultural imperative to see ‘ethnics’ as nothing but the other trying to emulate the self what reproduces and sanctions the logic of assimilation?

What if the children at the wedding in Dapto self-identify as Australian? What if the landmower is happy to be photographed by Whelan, but is an avid photographer, and would one day like their pictures own pictures of domesticity to hang in a prestigious gallery? What if the women dancing at the Hindu wedding really want to make a local film that captures all the dimensions of their lives, not just the South Asianness that they are required to put on display for the purpose of this photograph?

These are, of course, age-old questions about who can speak for whom (and how), especially when it comes to representing those on the margins of the cultural and political mainstream. There are lots of movements towards self-representation in the formal and informal community spaces of these margins. Scholars like Tanja Dreher, Chris Ho, and Juan Francisco Salazar, for instance, have written about migrant digital storytelling projects in western Sydney. On one level, one wonders why these self-represented stories rarely make it to spaces such as the State Library of New South Wales.

On another level, the imagined audience in these mainstream spaces has more power to act than those on the margins who are either testifying for someone like Whelan, or self-representing through a medium of their choosing. This presumably middle class, city-dwelling witness to the photographs can almost play the role of the adjudicator of the show, and has the option of taking their experience beyond the gallery through informal endeavours such as talking to friends, or more formal ones like political protest and lobbying. First, however, I/you/we have to develop the ability to self-witness and be critical of ways of seeing (and representing) that may be well-intentioned, but that are ultimately reducing the other to an artefact to be aesthetically consumed. Twenty-first century multiculturalism isn’t merely about celebrating the different colours and cultures inhabiting our cities and suburbs; it is also about finding better ways to relate to this diversity, of etching the face of the other in a universal patina with hues of individual/social difference.
Posted by Sukhmani Khorana at 13:54 1 comment: