Home and Away: when a male chef longs for Thanksgiving

I was engrossed in an episode of Ugly Delicious, an eight-part Netflix series produced by, and starring Momofuku founder David Chang when the news of Anthony Bourdain’s death by suicide appeared on my phone. Not only were my plans to critique the maverick persona of male celebrity chefs for an upcoming conference paper thrown askew, but I also felt sad for so many food explorers and writers, of any gender. This sadness wasn’t a mere homage to Bourdain’s culinary career; it came from a place of studying food media and the performance of masculine adventure for several years, and realising that the lettuce always seemed crisper on the more mobile plate.

What I mean is that as a woman, I long to explore cities and cultures with the same lack of reservation as the likes of Bourdain, Chang, and Rick Stein. Perhaps I also want to aid the decentring of whiteness in multicultural scholarship (and in food and travel writing) in the process. Yet, re-watching Chang’s episode on ‘Home Cooking’ for the purposes of my paper was an exercise in exploratory ambivalence. His chosen narrative is one of dissociating himself from Korean food at the beginning of his career, going on to bend all the rules through a globe-spanning noodle bar, and then declaring towards middle age that he wanted simpler, more home-style food in his restaurants. This could be read as an over-romanticisation of roots, and as essentialising the feminine (he declares at one point that his grandmother and mother only knew to express their love through food).  Moreover, research on chefs of colour seems to indicate that they are more likely to use tropes of family and ethnicity in their business and self-presentation. Chang, however, treads a fine balance between home and away in this series as a whole by being equally comfortable cooking shrimp toast in his mother’s kitchen before Thanksgiving dinner, and tasting tortellini in a Michelin-star restaurant in Modena, Italy. 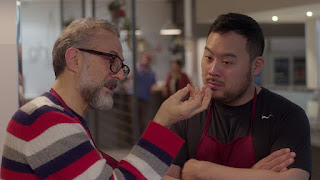 Also notable about this series is its exposition of male sociality around food. There is no death of the meat and building a barbecue in the backyard narrative, as well as forays to exotic places to sample strange creatures. However, what is distinctive is that the friendship between Chang and food critic Peter Meehan also has a cozy domestic dimension. Meehan joins him for the preparation of the above-mentioned Thanksgiving meal, and Chang declares that he is practically family. While it is common to see men cooking alongside each other in food television (such as in the Australian-based Surfing the Menu, which I examined in my book), this is rarely done in a home space. Let's hope this is the beginning many different kinds of culinary convivialities which are less invested in gendered performativity, both on and off the screen.

Will this series also encourage other male chefs, white or not, to make more than a passing reference to their nonnas? Will they be happily seen in their home kitchen teaching their daughters as well as their sons how to fold a dumpling? Will they valorise aspects of the culinary past, but also see the unfair division or domestic labour that was unwelcome for many women? Will they value the emotional labour of their partners who come to terms with their long working hours and prolonged absences? Will they recognise that wanting to be more grounded at times doesn’t make them less of a man, and might even be good for their well-being? 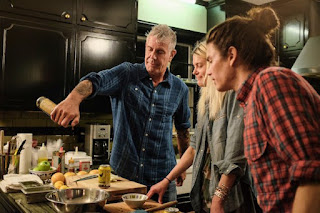 And for the women who want to cook, explore, and write about food, perhaps we need not emulate the model of relentless road tripping. We could also acknowledge the recipes and rituals passed down to use from our mostly female relatives, but help redefine foodwork as everyone’s work, and leisure. Media personalities like Nigella Lawson have done some pioneering re-jigging of cooking as self-pleasure in this regard. However, we have a while to go before this becomes a widespread domestic reality, especially for women who are not born with middle class capital.

Posted by Sukhmani Khorana at 12:01 No comments: