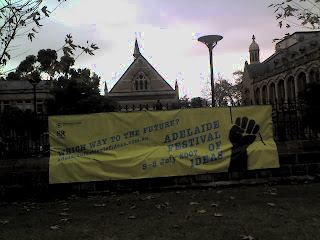 It was cloudy and pouring buckets over the three days of the Adelaide Festival of Ideas 2007. Reminded me of the current political climate in Australia. Not to mention the social and environmental components of the ambience. Clouded is the word. The sessions were well-planned. The speakers inspiring. The vision(s) encouraging. Yet as I stepped outside Elder Hall and gazed at the rather grey horizon, I realised there was an inside of ideas and an outside of apparent idealessness. While 'we', the privileged, the knowledgeable, the cosmopolitan agreed on the need for action to combat racism, conservatism and all manner of regressive -isms, there was no 'them' to challenge us in the elitist egalitarianism of our idea-filled confines. Gandhi was put up against Marx; India was proposed as a threat to China; Reconciliation was preferred over Intervention. But was there a debate? I opened my copy of the Festival booklet on the bus and felt hopelessly out of place. This surely cannot be the the way to the future.

Posted by Sukhmani Khorana at 01:17