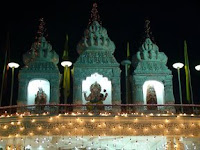 Was it an agnostically-divine, timely-timeless, monochromatically-colourful fraction of a second - the moment I met my motif?
Before I go on to a description of this motif itself, I must spend some wordy time on the long and uninspiring search for it. The (re)search has spanned and scanned continents, city streets, women's magazines, old family photos, bohemian retailers, dreadlocked musicians, fringy plays, art cinema, dismal philosophy, avant garde installations, and a great deal of self-centred thought. Even though I eventually discovered it sitting right below my nose (literally), I believe the journeying and meandering was necessary. These wanderings established a motif of their own - a pattern where my cultural/political leanings largely determined my aesthetic tastes. One could argue that this is the case for the a majority of homo sapiens, and that argument leaves me unfazed and convinces me of the 'normality' of my formative processes. The novelty in this normality, however, is the particular criss-crossings, the detailed design, the indelible imprint of this motif on my personal and political self (as opposed to selves).
It is the paisley - the same pattern that I saw my mother paint, sketch, block and screen-print, fill up with colour, and adorn with leaves in her textile-designing and my crayon-fiddling days. I have since admired its graceful shape(s) on cashmere shawls, South Indian brocade silk saris, Gandhi's khadi-inspired cotton prints, chic scarves and sarongs, silver beads and jewellery, Persian-style carpets and rugs, cushions and quilt cover sets, wrapping paper, handbags, and a range of other objects I am yet to lay my eyes on. It doesn't even need a Google search to realise that these patterns are here, there and everywhere; perhaps muticultural in a way modern people and nations can only aspire to be. While it may have had its hey-day during the hippie era in the 1960s, the paisley has certainly passed the test of time in terms of both its pop cultural and sub-cultural relevance. Growing up, I knew it as the 'ambi', which is a Hindi term for a mango seed, and now recognise it as the 'paisley', after a town of the same name in Scotland. Good old (or new) Wikipedia tells me it has resemblance with/refers to a teardrop, a Persian vegetal design, half of the Chinese Yin Yang symbol, the Indian bodhi/mango tree, the Indian/European medicinal leech, a Turkish calligraphic seal, the Zoroastrian symbol of life, the French rendition of the palm leaf, and the modern fractal image. Perhaps I sound idealistic here, but I want to unapologetically and unequivocally adopt and adapt the paisley as the visual motif for my aesthetically-political documentary as a film-viewing maker on the subject of 'homed-migrants'.
Posted by Sukhmani Khorana at 14:49

Thanks for your encouragement...I was indeed very happy when I 'met' my motif, and the writing just followed/flowed.
Also, I've had a brief look at your blog, and really like the realist(ic) quality of the images!