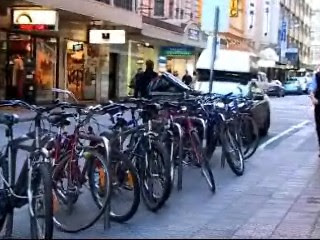 As I was walking through Rundle Mall today, capturing still images of its icons, trying to think of a story to tell about Adelaide, I realized I was in the middle of that story. For the only story about this city I knew well was the one I lived everyday, the one about my relationship with Adelaide and its streets. I reminisced about my first ever walk through Rundle Mall – what a rite of passage it was, when I, a 19-year old international student from India, navigated a western city mall for the first time in my life, with my father firmly by my side. I remember feeling lost, and vaguely registering the difference between the eastern and the western precincts. Now, almost half a decade later, I wouldn’t say I have come a long way, but the same path has become more meaningful; each arcade, retail store, food court, street café, mall bench, phone booth reminds me of something or the other I did there with friends as well as strangers. Each spot is a unique intersection of time and place, a story-memory of love and friendship, shopping and food, deep conversations and gossip, homesickness and belonging. And the strip itself, with its absence of traffic, and its sometimes overwhelming presence of people, is almost like an island of transition – like the foreign yet familiar transfer lounge of an international airport. This island both connects and disconnects the eastern and western ends of Adelaide. It lends an exclusive air to Rundle Street, while allowing Hindley Street to be naughty. And as I walk across it today, closer to dusk than to dawn, stepping alternately into the shadows cast by people, buildings and trees, and then the light pouring in from the alleyways, I experience the shifting greyness of my own Adelaide story. It is a story that lies between east and west.

Posted by Sukhmani Khorana at 15:45